Claim: A Pakistani tabloid claims that author Fatima Bhutto demanded that Zahir Jaffer be given privileges in jail.

On 6 August, a tabloid news outlet called The Snazzy Report shared a post on Instagram that claimed author and columnist Fatima Bhutto asked the “Pakistan Penal system to give special jail to Zahir Jaffer”.

The Snazzy Report, which appears to share daily updates mainly on the happenings across Pakistan, is owned by the online platform Mangobaaz.

The caption with the post read: “Fatima Bhutto cousin of Bilawal Bhutto, who is a writer, called out Pakistan Penal System pn [sic] Twitter to give privileges to Zahir Jaffer in jail. Criminals are supporting criminals in our country. Rich people get away with anything using their privileges. But PM ensured that he will be severely punished. #TheSnazzyReportbyMangobaaz #TheSnazzyReport.” 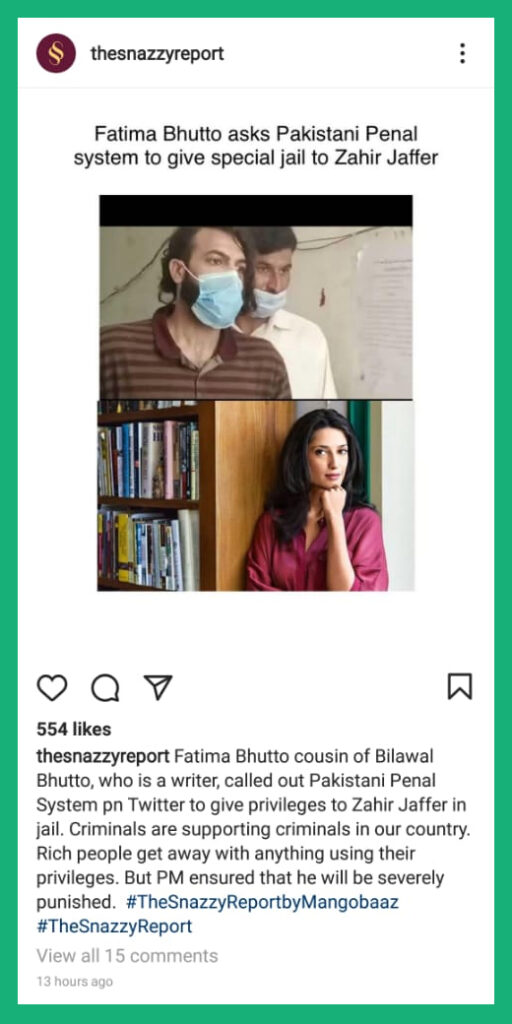 Soch Fact Check did not find any tweets to support this claim on Fatima Bhutto’s Twitter or Instagram pages.

Bhutto first tweeted a thread about Noor Mukadam on 23 July, two days after the 27-year-old was found dead in Zahir Jaffer’s home in Islamabad on 21 July. Jaffer, who allegedly tortured the young woman before stabbing and beheading her, is the son of influential business magnate Zakir Jaffer.

Lastly, the domestic violence bill should be passed immediately and without a moment's delay. A council of true Islamic ideology would have no objection to preventing violence towards women and punishing those who inflict harm on them.

She lambasted the “system that too easily bends to power and influence” in her first post. She tweeted four times after that about Jaffer and the treatment he was reportedly receiving in the Central Jail Rawalpindi — commonly known as the Adiala Jail — and, in another one, shared an op-ed.

In her tweets on Jaffer’s treatment in prison, the author criticized the “sick abuse of power”, terming it “outrageous”, stated that the accused’s “privilege exposed like this stains all pretences of law +justice”, and asserted that “prisons are build to denigrate, isolate and punish the poor”.

None of her tweets indicated that the Pakistan Penal System should give special privileges to Zahir Jaffer in jail.

Conclusion: Fatima Bhutto has not called for privileges to be given to Zahir Jaffer in prison. She has actually highlighted the double standards between the treatment of influential prisoners and those belonging to low-income or middle-class families.

The Quaid never said that “none of us are Sindhi, Balochi, Pathan or Punjabi”

The resolution was presented in September 2021, following which no further action was taken

Ahsan Iqbal did not say that the CSS exam should be conducted solely in Urdu
wpDiscuz
0
0
Would love your thoughts, please comment.x
()
x
| Reply