Fact: The claim is misleading because the woman in the video is not Messi’s mother, Celia Maria Cuccittini, but the Argentina football team cook, Antonia Farías.

On 19 December 2022, a video went viral on different social media platforms with the caption, “Messi with his Mother after winning the final.”

The video went viral after Argentina beat France in FIFA World Cup 2022 final and won the title once again after 36 years.

Soch Fact Check conducted a Google search with the keyphrases “Celia Maria Cuccittini” and “FIFA Final”. The results showed a fashion news article by Foot Wear News, published on 19 December 2022. The report states that Cuccittini supported Messi in the stands during the final, wearing a purple World Cup jersey to represent Argentina.

A further search found another report published by The Sun. It shows a picture of an elderly woman with the Argentine footballer with the caption, “Messi enjoyed a special moment with his mother Celia Maria Cuccittini.” 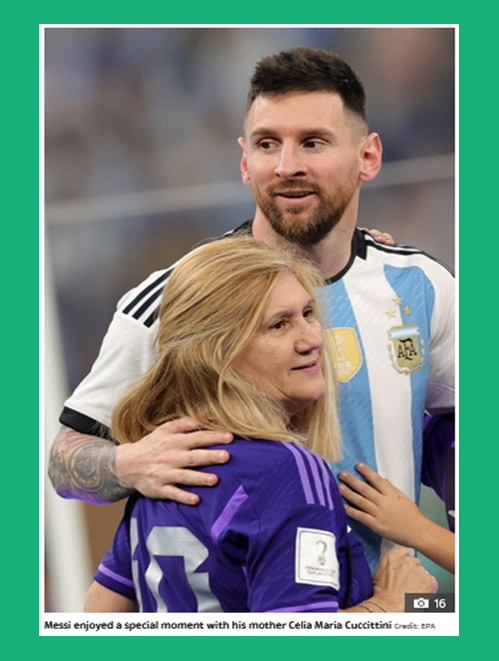 Further investigation showed news reports published by Argentinian media outlets Los Andes and Clarin. Both articles reported that the woman in the video embracing Messi is Antonia Farías, the official cook of the Argentina football team.

According to Los Andes, Farías is the cook of Argentina team for the last 10 years and has travelled with the team regularly. Previously, she attended football events including Copa America in Brazil, and La Finalissima in Qatar. The news article also features a photograph of Farías celebrating with the team after the FIFA 2022 final and an image from Messi’s 31st birthday in which the cook is standing with him.

In July 2021, she also posted images of herself celebrating with the team after winning the Copa America.

Soch Fact Check conducted a CrowdTangle analysis for the 7-day period from 19 to 26 December 2022 using the following search term:

An organic search on Facebook showed that the video received 10,000 views and 1,200 likes. It can be found here, here, here, and here.

The video with the same false claim was also posted on YouTube shorts/reels here, here, and here and received more than 175k views.

Conclusion: The woman embracing Lionel Messi after he won the football world cup is not his mother but the Argentina football team cook Antonia Farías.

A tsunami did not hit Turkey after Feb 2023 earthquake

Two children, including one on a wheelchair, appear to be badly burnt in viral clip
wpDiscuz
0
0
Would love your thoughts, please comment.x
()
x
| Reply