Claim: The Sindh High Court has released culprits in Arzoo Raja abduction case, charges have been dismissed, as judge remarked that it is not a case of rape.

Fact: Offence of Rape was declared and the court ordered the absconders to be arrested.

On 13 October 2020, Arzoo Raja, a thirteen year-old Christian girl, was kidnapped from outside her house and reported missing by her parents. Two days later, it was discovered that she had been abducted and forced into marriage, and her religion had also been changed, making it a case of forced conversion.

The culprit, Azhar Ali – a 44 year-old Muslim man – was aided by accomplices who helped prepare fake documents to declare that Arzoo is eighteen years of age. Arzoo’s parents pursued the case in court. The most recent hearing took place on 23 November, in which the court declared that Arzoo had been illegally married and introduced rape charges against Ali.

With regards to this case, several claims have surfaced on Twitter suggesting that either the case was dismissed or the culprits were released or that the court did not accept the charge of rape for Azhar Ali. One such tweet that gained the most traction on social media and was directly engaged with by Arzoo’s Parents’ legal counsel was by a Twitter handle titled Rahat Austin John.

John, who describes himself as a “Lawyer, Author, Activist” on Twitter and LinkedIn, and has over 11k Twitter followers, tweeted about the case. In his tweet he incorrectly reports the court’s verdict and claims that the case was dismissed, the culprits were released, and Azhar Ali was not charged with rape. 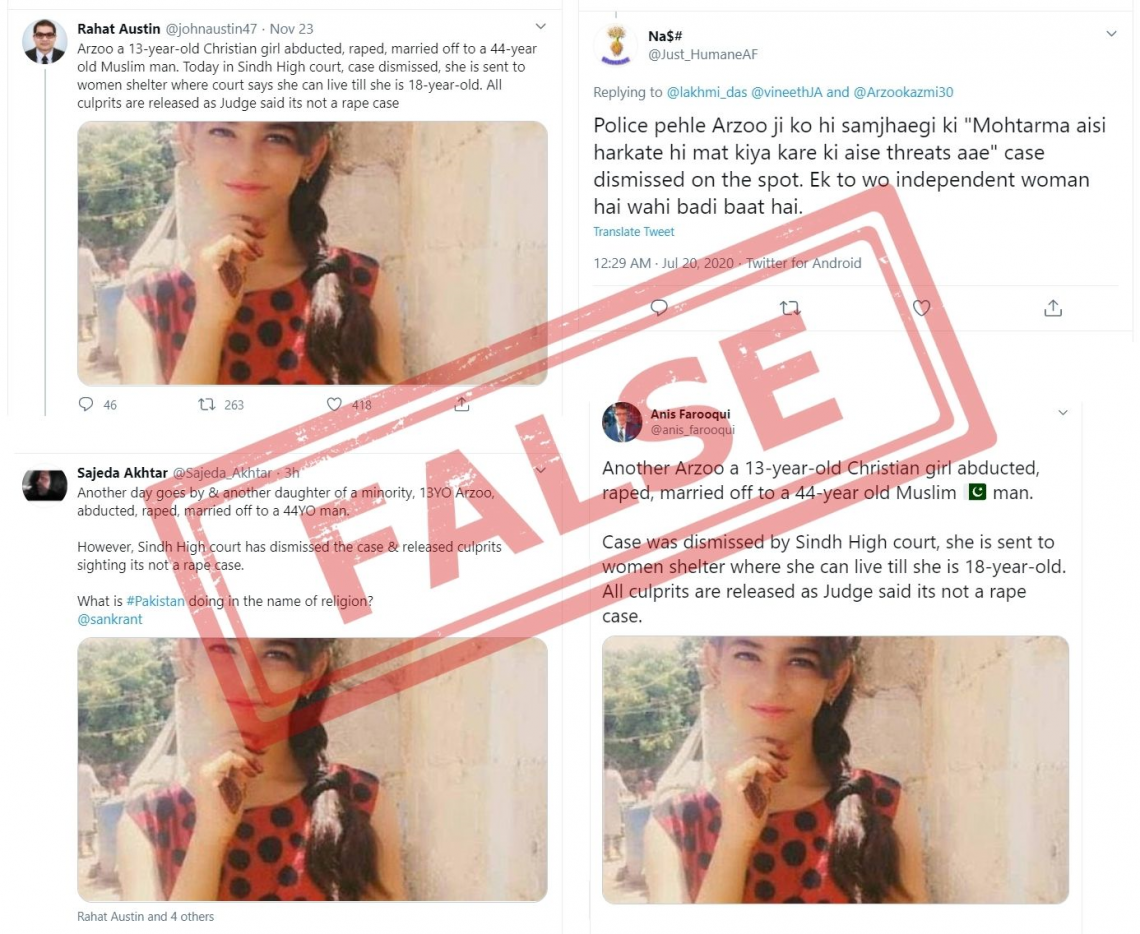 However, these claims are false.

Muhammad Jibran Nasir, the legal counsel for Arzoo’s parents, replied to Rahat John Austin on Twitter, criticisizing him for sharing false news. He also attached the document of the court’s verdict which clearly states that Arzoo was declared underage and hence the marriage was an act of forced conversion and rape since Arzoo was not of legal consenting age.

Fake news! Pls read court order. Offence of Rape has been added in FIR. Accused & all his relatives barred from meeting Arzoo. Trial to go on. Directions given to arrest all absconders. Pls stop spreading fake news and defaming courts. If you made mistake then please delete tweet pic.twitter.com/LoZD57mOVK

The News reported on 24 November 2020 that Azhar Ali was charged with rape and six others, two lawyers, two witnesses, a justice of peace and a Nikah Khawan, under sections 3, 4 and 5 of the Sindh Child Marriages Restraint Act. The two-judge bench headed by Justice K. K. Agha, dismissed the petition filed under Arzoo’s name which aimed at reconnecting Arzoo with Azhar Ali and sent her back to Panah shelter.

Dawn reported on 24 November 2020 that contrary to the claim, the court directed police to track down the absconders and bring them to justice. The Investigating Officer, Shariq Ahmed Siddiqui listed eight people as witnesses of the prosecution. He removed Section 364-A (kidnapping or abducting a person under the age of fourteen) and replaced the same with Section 375 (iv) which pertains to rape. The charge-sheet was submitted by the IO before Judicial Magistrate (South) Mohammad Ali Dall today, on 24 November 2020. Soch Videos also reported on 23 November 2020 that according to the Section 375 clause 5 of the Pakistan Penal Code, Azhar Ali was charged statutory rape.

Soch Fact Check spoke to Mohammad Jibran Nasir with regards to this case— he clarified that Arzoo’s parents are not satisfied with the charge-sheet at the moment, since Azhar Ali is still not being charged with abduction, child seduction and exploitation. Moreover, he confirmed that Azhar Ali has been charged with statutory rape – engaging in sexual intercourse with a minor.

Section 375 of the Pakistan Penal Code.

Currently based in South Korea, Rahat John Austin is a lawyer from Lahore. He also tweeted about the Ghotki Fire in April 2020 – sharing graphic images of burnt bodies, he claimed that this was an arson attack by Muslims. (An archived version of the thread can be found here).

Pakistan Today reported on 5 April 2020 that the cause of the fire was a stove malfunction and it reached five houses. Addressing the false claims, Special Assistant to CM Sindh on Human Rights, Veerji Kohli tweeted that it was not a religious dispute.

Summary: Social media users tweeted that the culprits in the Arzoo case were released and Azhal Ali was not charged with rape and the case was dismissed. However, this is false because the document containing the court’s verdict clearly orders the absconders to be arrested, charges Azhar Ali with rape and the legal counsel for Arzoo’s parents, Mohammad Jibran Nasir has tweeted that the trail is still going on.

No, banners or slogans at Aurat March were not blasphemous

No, ECP was not directed to print traceable ballots. Here’s everything you need to know.